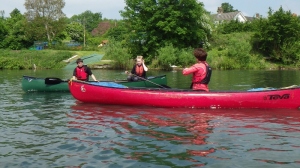 Coaches from many sports will be familiar with the IDEAS coaching model and this is widely used in paddlesport coaching, particularly at the introductory stages. Through the BCU UKCC Level 1 Paddlesport Coach course we teach that the activity (A) phase of IDEAS should be given the most time, followed by the demonstration (D), but each phase is important and a recent course reminded me just how useful, and sometimes undervalued, the summary (S) element can be. It was great to see a number of candidates recognising the benefits of using questioning to reinforce learning and asking their students what they had taken from their sessions. Rather than simply repeating the name and purpose of the skill and highlighting the key coaching points, these candidates were asking their learners to relay back this detail, checking their understanding and clarifying any necessary points. Of course, like all coaching tools, questioning needs to be used with a degree of skill to be effective but the course provided a vivid example of how powerful this approach to a summary can be both from the learner’s perspective and in terms of allowing the coach very clearly to see which parts of their session have been effective and which parts have been less so.