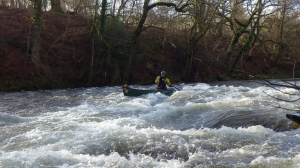 Bill Mason says it’s “to be avoided like the plague” but when I’m canoeing and want to take a break from paddling yet still maintain a straight course – perhaps to observe another paddler’s technique or simply to enjoy the scenery around me – I will deliberately allow my blade to drift into a “goon stroke” as I too often hear it called.

It seems to me a great shame that the term “goon stroke”, with its many negative connotations, is given to such a useful technique with the result that many paddlers deride it. As well as being equally good for holding a course while cruising and running rapids, it’s just the stroke to have up one’s sleeve when surfing a wave, crossing a current or, dare I say it, performing steering corrections at the stern of a tandem canoe! Indeed, for many paddlers new to canoeing it’s the main steering stroke they use.

And yet it’s demonised! Even Bill Mason goes on to acknowledge that the stroke has its uses in white water canoeing and if we accept that, surely it makes sense to include it in a beginner’s repertoire from their earliest days on the water. If we’ve introduced a learner to a stern rudder in a kayak why not transfer that learning to canoe and then progress to the wonders of the J stroke family?

Ray Goodwin takes this fresh approach to the stern rudder in his book Canoeing and it was great to see Karl Midlane also recognising its role as a corrective canoe steering stroke in last month’s Canoe Focus.

5 responses to “Banning the “goon stroke””