Like many other paddlers, I’ve not strayed far from home since the Covid-19 lockdown was announced here in the UK on 23 March. In the whole four months that have passed since that day I don’t think I’ve ventured further than 30 miles from the house. It does seem strange not to have been paddling on the Wye, or in Wales or on south coast. But on the plus side, I’ve been able to explore even more of the Thames than ever before.

The Thames has always been my local river and I reckon I know it better than most. Out paddling on it has never failed to offer some memorable moments. I’ll certainly never forget the winter afternoon almost fifty years ago when, paddling with a fellow Scout and working towards our Canoeist proficiency badge, behind schedule and missing Teddington lock in the dark, we continued into the weir pool wondering why the water was becoming rougher, the noise becoming louder and why, peering into the gloom ahead, there appeared to be a wall across the river in front of us. That was my first encounter with one of the Thames weirs. Needless to say we survived; we also achieved our Canoeist badge.

From Cricklade to Westminster I’ve paddled every reach of the river, most stretches on many occasions.

I’ve also paddled most of the Thames backwaters, exploring behind islands, pushing through shallows, sometimes climbing over or through trees. These backwaters are among my favourite places and given the choice I will usually prefer to take these side channels, sometimes for the sheer sense of adventure, often just to have a glimpse into other peoples’ lives, to look with a mixture of awe and amazement at what can found in their back gardens.

The backwaters around Oxford are an academic delight, St Patrick’s Stream and the Hennerton Backwater above Henley make probably the best sheltered water trip in the country, the properties lining the channel behind Gibraltar Islands at Winter Hill must be the most scenically situated. The Abbey River between Penton Hook and Chertsey was however, until this month, un-paddled territory for me.

That changed when Liz and I arrived at Chertsey early on a fine morning and squeezed into the small car park by Chertsey bridge. It took only a few minutes to paddle up between Chertsey weir and the recently re-opened Camping and Caravanning Club camp site to the restored boat rollers under the bridge that marked the start of our adventure. As we cleared the rollers a voice called out, asking if we were aware of the nesting swans further up the river. We said we weren’t, thanked the caller and made our way around the bends ahead. The water was clear and shallow, the vegetation thick and green. At one point we had to step out of the boat to clear a gravel bar. We soon came to another property with a small rocky weir under a bridge. We stepped out to lift our canoe over the rough concrete blocks and another voice called out to beware of the swans nesting a little further on.

We continued cautiously until, as we approached a third bridge, we saw the swans preening themselves on the bank to our right. We slid past nervously but the swans didn’t pay us a second glance. A little further on and yet another voice called out to us: had we seen the swans? Yes, thank you, we replied, grateful of a safe passage, and continued on our way.

The air was full of the sound of buzzing insects but this was soon drowned by the roar of traffic as we drew close to the M3 motorway. We ducked under a fallen tree and entered a wide culvert under the road deck. We emerged into a wooded area where overhanging and fallen trees increasingly slowed our progress. The noise of the motorway lessened to be replaced by the sound of people screaming through the trees to our left; we were now close to the Thorpe amusement park. The trees thinned and were in their turn replaced by areas of tall reeds, crowding the waterway and leaving only a narrow channel for us to follow. After a while static caravan units appeared on our right and we came across a few moored boats, the river was widening again and eventually we emerged at Penton Hook marina.

The Abbey River was less than two miles long and had taken us almost an hour and a half to ascend. But what an adventure! The river is clearly shown on the Ordnance Survey map; that there were boat rollers at the start was a clear clue that the river was navigable. Guide books reinforced our confidence that a through-route was possible while fresh saw cuts on some of the overhanging branches told us others had passed the same way recently. But for all that it was our first experience on the Abbey River and our passage through to Penton Hook was not guaranteed until we reached it.

Through that hour and a half and the shorter (and quicker) paddle back down the Thames to Chertsey I reflected on how much that sense of adventure has driven my passion for paddlesport over the years. There is of course something special about exploring somewhere for the first time, but I know that when I go back to the Abbey River I’ll see things I missed on the first trip, the season and the colours will be different, as will the water level and the weather conditions. It will be another new adventure just like the ones I enjoy every time I go out on the water. 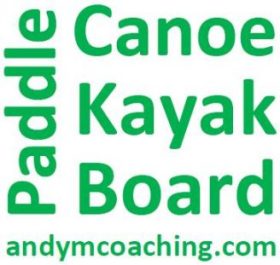